The traditional route of using a Vox AC30 and treble booster to get Brian May tones has some major drawbacks. It is an expensive rig to buy, is very heavy (AC30s are real back breakers) you need to run the amp at full volume to get the full ‘BHM’ sound. An alternative is to use a ‘simulator’ which can be run into an amp and give good Brian May tones at lower volume levels and at an affordable price 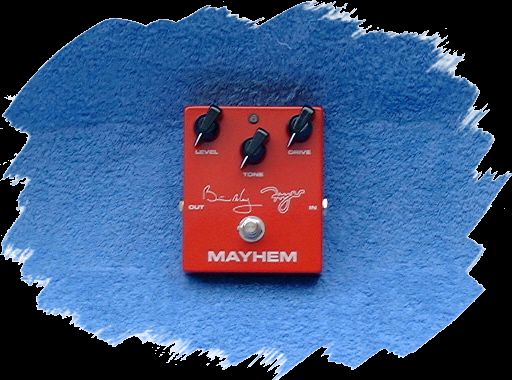 Greg Fryer’s Mayhem pedal is part of the officially endorsed Fryer range. This pedal is designed to give full ‘Brian May’ sounds at lower volume levels when used in combination with a treble booster and amp. It will also give credible ‘Deacy amp’ sounds. The original red version is now discontinued, but the blue version is still available and is designed to work with a wider range of amplifiers. 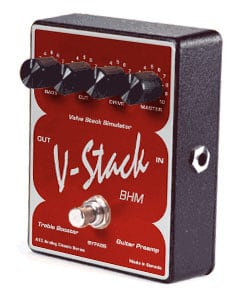 The V-stack came on to the market in mid-2003 and a special ‘BHM’ edition designed to give accurate Brian May tones was launched soon afterwards. This pedal is designed to mimic the responses of a treble booster driving a Vox AC30 normal channel, to give the ‘BHM’ sound. One advantage of this system is the excellent flexibility – it gives authentic Brian May tones at low or high volume levels through a wide range of amps and can be used for direct recording into a desk or PC. 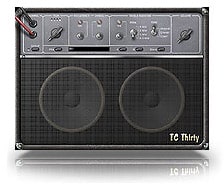 Powercore is a DSP processing system from TC Electronic, which is designed to be used with a PC or Mac. The system is available as PCI card or rackmount firewire versions. It is designed to interface with computer-based recording systems. In mid-2004, TC Electronic released the TC Thirty plug-in which is designed to simulate the responses of Brian May’s AC30 and Treble booster system. TC Thirty is a software plug-in which runs on the Powercore system. Much of the work on this plug-in was done by Stephan Moeller, who is well know for his analogue AC30SIM system. Read more about the Powercore and TC Thirty system in the attached file.