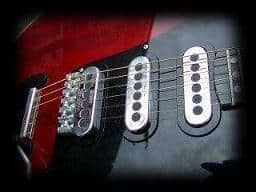 Brian is famous for his great guitar tones, but because his sound is so distinctive, it is rather difficult to copy. To get ‘that’ sound exactly, you will need the same equipment Brian uses:

* VOX AC30 amps – one will do, but preferably three or more

Brian has his guitar plugged into the ‘Normal’ channel on the AC30s and has the treble booster turned up to just below the point where it goes into feedback. He has the amps turned up full and uses the volume control on his guitar to control the sound. If you want to try this setup at home, you should be aware that the AC30 is a vintage-style amp with no master volume control, so you will only get those classic sounds with everything up full (i.e. VERY loud).

If you don’t have a Guild BM Signature guitar and AC30s, you can still get fairly close to Brian’s sounds using other guitars and amps. A Gibson Les Paul type guitar will give a warm rich sound, but perhaps lacks some of the rhythmic ‘snap’ of single coils. A Fender Stratocaster type guitar will not really give enough warmth, but re-wiring the pickups to Brian’s configuration (with series wiring and phase switching) would get you much closer to his sound.

A class ‘A’ valve amp (such as a Matchless or Laney) will give you the right kind of tones, with a warm smooth overdrive. There are also many other suitable amps. If you’re using a modern high-gain amp like a Marshall, Mesa Boogie, Peavey etc., keep the gain well down and add plenty of mid-range EQ – you’re looking for bluesey crunch rather than all-out metal. The main point is to get a smooth, warm overdrive sound with plenty of sustain. For clean sounds a hint of chorus would help a lot and of course you’ll need delay machines if you want to imitate Brian’s Brighton Rock solos.

You will also need a treble booster to get a good Brian May tone, as this is an essential component of his sounds. There are various commercial models available, or you could try building your own.

The pickups on Brian’s Red Special are wired in series, with phase change switches, which allow a very wide range of tones. Brian’s main guitar tone uses the bridge and middle pickups together in phase, which gives a very warm rich sound, similar to that of a humbucker. He mainly uses this setting for rhythm work. For lead sounds, he often uses an out-of-phase setting, which cuts the lower frequencies and gives a much harsher ‘screaming’ sound. The guitar solo on Bohemian Rhapsody is a good example of this tone setting.

The semi-solid construction of Brian’s guitar, coupled with the amps turned up full gives a very ‘live’ response, which can easily lead to a ton of unwanted feeback. The solo for Put out the Fire is a great example of this. Here, Brian is using an out-of-phase pickup setting for that ‘screaming’ sound and has everything turned up full. The sound is right on the edge of endless feedback, but he somehow manages to control it and produce a great solo, which Brian says that he never really liked but I beg to differ!

Once you’ve got a guitar/amp setup sorted, you then need to start on the difficult bit – playing like Brian!

Brian is undoubtedly a very gifted player, but his playing style is not as technically oriented as players like Jimmy Page, Jeff Beck or Nuno Bettencourt, so his riffs and licks are not too difficult to copy. He is more interested in conveying emotion and providing solos which fit to the style of a song than playing a thousand notes a second.

Brian’s rhythm work often relies on open chords and the ringing smooth overdrive sounds from his AC30s. He also uses chord inversions to give some tonal variation during a song. When playing live with Queen, he was the only guitarist, so his rhythm playing relies on producing a full rich sound.

Brian’s guitar solos are very melodic and often feature harmonised, multi-tracked guitars. His guitar/amp setup provides excellent sustain, so he is able to hold long notes and develop some excellent melodies, with particular use of string bending and vibrato. The light gauge strings on the Red Special allow easy string bending and Brian often uses a combination of string bends with heavy finger vibrato when soloing. He sums up his approach to soloing thus; “…the best solos are something which you can sing as well as the melody line. The kind of solos I enjoy are where there’s a line which reflects the melody line but subtly changes it in some way which adds to the song.” Total Guitar magazine summed up Brian’s solo work perfectly when they described the guitar solo on Hammer to Fall as “…unmistakably May – melodic and yet flash, heavy and yet smooth.”

When playing live, Brian’s improvised solos are usually based around major and minor pentatonics, although he often uses unusual scale positions. A characteristic feature of his improvised solos is the continuous use of hammer-ons and pull-offs to create rapid slurred notes.

Brian May is a great songwriter and was responsible for composing some of Queen’s greatest hits. His style is quite distinctive and it is usually fairly easy to recognise his songs if you listen to any Queen album. Brian is able to write songs in a wide variety of styles, but being a guitarist, his work is often quite guitar-oriented. In the November 1982 issue of Musicians World magazine, he summed up his approach to songwriting thus:

“I write best when I’m not on guitar; maybe a few riffs or the basis, but strangely enough, you usually get the most perspective on a song when you’re on an instrument that you’re not accustomed to. I’m not accustomed to playing the piano and I find that quite inspiring, because your fingers fall on different patterns. Whereas on a guitar, I pick it up and know where my fingers are going to fall. Mostly I sit alone someplace and think about it. That’s the best way. I don’t think my songwriting has changed as much as the others in the group. I tend to write more traditional Queen material like Las Palabras De Amor. I still tend to write melodies and that certain sort of heaviness, which the group does well at its best; the guitar and piano which have that sort of thick sound. I really enjoy that, although these days it’s used a little bit more sparingly.”

If you really want to look and sound like Brian, you’ll need to grow your hair long and curly. Get yourself some long curly guitar leads and some white clogs. Remember to use the whole stage and give it plenty of ‘action’ when soloing. When the solo ends and you have to get back to the mic to sing, make sure you are at the opposite end of the stage so you have to make a frantic dash back to the mic!