Brian has three Guild copies dating from this era which he has used live and in the studio many times, but these are prototype models built specially for him rather than the commerical version. 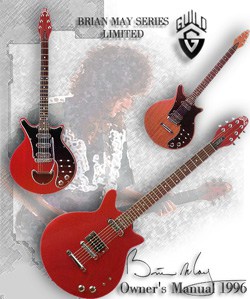 In 1993, Guild re-introduced the Brian May Signature Series, a limited run of 1000 guitars, with three new models. These were:

The top model of the series, the BM01 is a very close copy of Brian’s Red Special. It features Seymour Duncan pickups, which are very good copies of the Burns Tri-Sonics on the Red Special. The tremolo/bridge system is a custom Schaller unit, which is also a very good copy of Brian’s original. The body and neck on the BM01 are mahogany and the fretboard is ebony. The body has binding on both the front and back and a 5-ply scratchplate. The construction of the BM01 is semi-solid, again exactly reproducing the details of the Red Special. Initial models were known as the Brian May Signature and featured a transfer of Brian’s signature on the back of the headstock. Later models were known as the Brian May Pro and did not have the signature, but were available in a range of custom colours.

The BM02 is a slighly cheaper version of the BM01. The main differences are that the BM02 has a rosewood fretboard and binding on the upper side of the body only. This model has a fixed bridge (Gibson style) and the middle and bridge pickups are positioned next to each other.

The BM03 follows the same outline of Brian’s original Red Special, but is a rather different guitar both visually and electrically. The fretboard is rosewood, with no binding on the body. Three pickup options were offered: BM033 3 single coils (Fender style), BM032 2 humbuckers with coil taps (Gibson style) and BM031 1 single coil + 1 humbucker with coil tap (hybrid). The switching has no phase change options, so the sounds available are much more conventional than the Pro and Special models. The body construction is solid (ie no routed sections like the BM01) 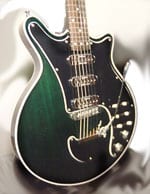 Many thanks to Dan Astor for the pictures of the Guild guitars and lots of useful information.