I had the privilege and honor of meeting Brian, Roger, Peter and Ian yesterday. I got a call to set up a Strat for a special show of We Will Rock You here in Las Vegas. It will feature the boy’s and several guests. SIR needed a strat set up for the guests. The Queen rider specified a nice strat with .9s set up with a floating trem. When I finished setting up the strat I asked if I could help deliver the gear with the rental company since I was off.

When I entered the rehearsal space I saw a Red Special. I asked a rather cool looking young gentleman if it was a Fryer or a similar replica. He informed me it was the Lady, I almost lost it. Trying to not act like a 5 year old at Christmas, I asked if it was all right to look at her. The gentleman said “no problem”.

I inspected every aspect of the guitar and quickly bolted to my truck. I had purchased a disposable camera on the way over just in case. I cannot remember entering the studio, I believe I either floated or flew. I then politely asked if it was all right to take a few photos, once again this very nice man said sure. 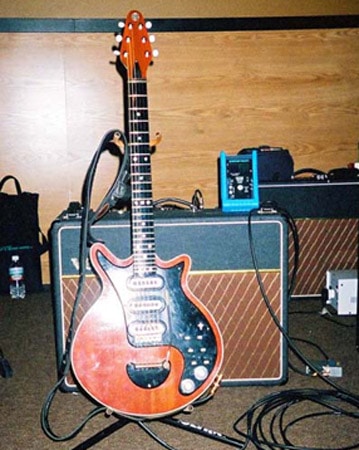 I asked him if he was Brian’s tech and he was indeed. I then got the nerve to ask to see the back of the guitar, once again he said sure, to this day I have never seen a shot of the bolt setup. There is was and it actually protrudes out of the back of the guitar. The veneer that Greg Fryer fixed on the back is quite evident. I paid close attention to the binding behind the neck as well.

The headstock has always been a mystery to me because of the slope about an inch behind the nut. To see the actual headstock, Bakelite nut and truss rod in person was very eye opening. When the guitar was resprayed a lot of character blemishes were left intact. The headstock had a lot of pinhole type marks. But they seemed to ad to the beauty. 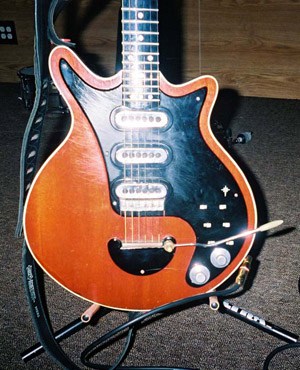 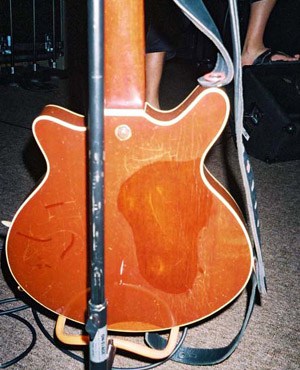 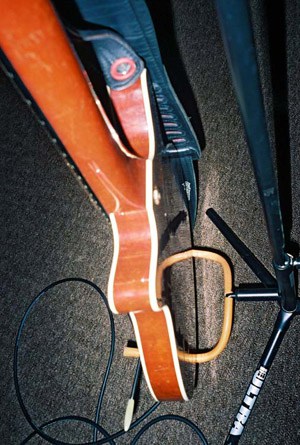 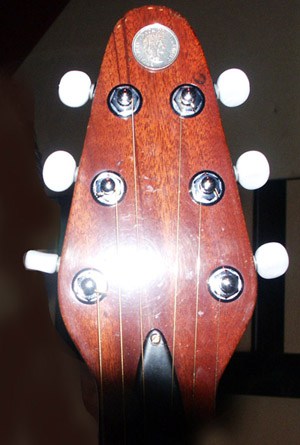 Just when I was about to hand the guitar back Peter took several pictures of me holding it and asked if I would like to have a play? After pinching myself I played a few notes and handed it back. That was going too far, my mind was on overload. I am a fan of slim necks and this neck; no offense was built for a linebacker.

The neck is really different, as you go up the neck it gets bigger, I mean very big, Brian must have huge hands because this feature is kind of funny in contrast to the overall guitar. Don’t get me wrong I loved the neck it just really blew me away at the size. The back hump was a littler smaller than the KZ and the Bakelite nut was sort of a brownish color. 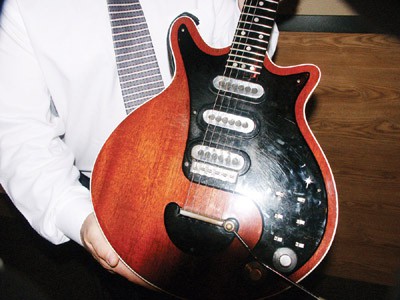 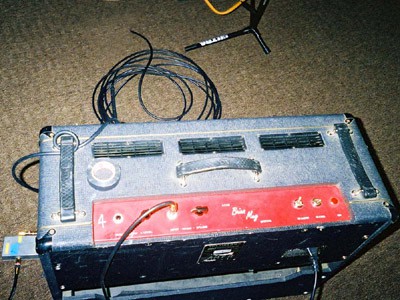 The body is beautiful and the color is amazing. It has an orangish quality to it. It is not really red but more brown orange. The veneer on the sides is perfect as well as the binding. The guitar had to be in fairly good shape prior to the restoration. Now considering the amount of gigs it has seen as well as rehearsals and studio time. This baby has probably seen more use than just about any guitar in history.

Think about it, most guitar players get new guitars every few years. This guitar has seen all the Countries of the world. All different climates and weather, yet it still has the original frets. The same pickups, bridge and trem. Speaking of the trem, the low E saddle is so worn that there is only on slot left for a roller. The tremolo bar tip is also a thing of beauty; it has a sort of mint green tinge to it.

Well I could go on and on about this experience of meeting the Red Special in person. I think I have taken enough space so far. Well as I was about to leave a Limo pulled up and guess who got out? Brian and Roger, I went back in and asked if I could return with my Guild and was told “sure” and instructed what time the rehearsal was through.

As I was speaking with Peter about my guitar, the guitar player from the Vegas cast came in and started inspecting the Lady. He asked why it had acoustic strings and was told they were Maximas. He then strapped it on and played it, and he was not shy like me. He opened it up full throttle and it smoked. I looked down and noticed the rather plain looking booster with no switch or knob. Let me tell you it breathed fire. It was so loud and punchy and clean at the same time.

As he rolled of the volume control it cleaned up so nice and the different phasing sounds were incredible. I wanted to give the guy’s their space and asked if I could run to the store for anyone. I did and when I returned said “I’LL BE BACK”. On my way home I dropped the camera at Wal-Mart to have the film developed. I then polished up my Guild and headed out the door.

I arrived in perfect time to get the guitar signed and in walked Brian and Roger. I had a goofy smile on my face and tried in a few seconds to let the guys know how much they meant to me. I told Roger how much I respected his playing and could not seem to say much to Brian except thank you for all the great music. I asked him to sign my guitar and took a picture with him and Roger. I wish now that I would have asked Roger to sign it as well. These guys must have sensed that this was a huge event in my life and they were so nice. Roger as well was such a nice gentleman. 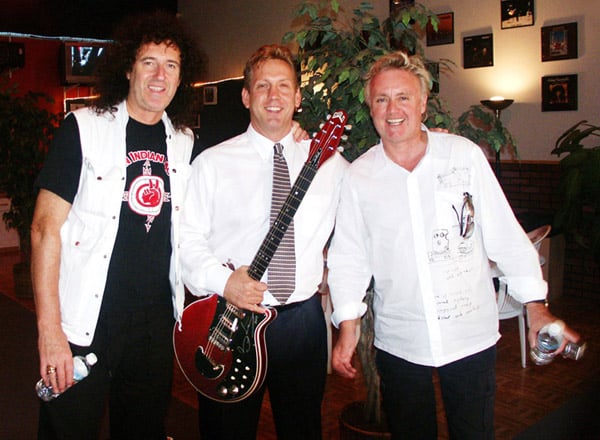