The treble booster unit is an essential component of Brian May’s unique guitar tones. This is not a fuzz or distortion pedal, but a simple device which boosts the level of the guitar signal and reduces the lower frequencies. Using the booster, Brian is able to push his VOX AC30s into a warm valve overdrive for those classic tones. He also uses his treble booster with the ‘Deacy’ amp to give the amazingly smooth, rich violin-like tones which he uses in many multi-layered ‘harmony’ recordings. Here is my guide to some of the commercially available treble boosters.

“By Matthew Pickles and Esteban Anderson”

Greg Fryer is sells several ‘official’ treble booster units with Brian’s endorsement. The Ringmaster, is an updated version of the Dallas Rangemaster for early-Queen tones. For more modern Brian May sounds, the Treble Booster and Treble Booster Touring units are also available. These are updated versions of Brian’s originals which have been designed to create the tones accurately but with reduced noise and improved reliability.

Pete Cornish is one of the most respected electronics experts in the music industry. He modified Brian’s treble booster in the late 1970’s to improve the reliability and reduce the noise. This booster can be heard in action on many Queen recordings. Pete can custom build treble booster units which are identical to the one he built for Brian. 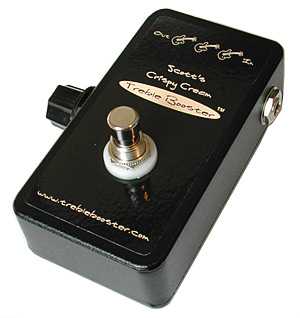 Superfan Scott Humphrey has been building treble boosters and amps of his own for some time, in his search for the ultimate Brian May tone. He’s also built an excellent replica of the Red Special. Scott has now put his ‘Crispy Cream’ treble boosters into production and is selling these commercially. He’s had some excellent feedback from users – check out his website for more information.

The BM-Q treble booster came onto the market in late 2003 and is made by a company called BSM from Germany. They also produce a clone of the Rangemaster. This is a high quality pedal with a little more gain than the Fryer units (about 4-5dB more), at a reasonable price. This gives slightly more distortion and sustain, but still gives a crisp clean sound if you roll back the guitar volume pot.

Brian’s original treble booster unit was a Dallas Rangemaster, which he lost at a gig in the mid-1970’s. The Rangemaster was used for all the early Queen recordings and has a slightly ‘raw’ tone compared to Brian’s later boosters. The Dallas unit is no longer in production and is a collectible ‘classic’ effects unit, but they can be found secondhand.

Don Butler’s Tone-man company are now producing faithful reproductions of the original Dallas Rangemaster unit and they own the trademark for the Rangemaster name. Their boosters also feature useful updates such as a true bypass switch, but still maintain the classic Rangemaster tone, for those early-Queen sounds.

Well-known effects expert R.G. Keen also has schematics and build instuctions on his Geofex website, so you can build your own Rangemaster.

Guild supplied treble booster units with some of the 1984 Guild BHM-1 guitars and also briefly sold a similar version separately when the 1993 Guild Brian May guitars were launched. The design of these boosters used two transistors (as opposed to one in most booster designs) and they were a little noisy (i.e. prone to hiss), but used with a Guild Brian May guitar and VOX AC30, they will give reasonable Brian May tones. The Guild boosters are no longer available new but they can be found secondhand.

Vox has recently launched to the market the new Cooltron series. These are stompboxes that use a 12AU7 preamp-type valve at low voltage. One of these new pedals is the Brit Boost wich is basically a Treble Boost with the addition of a Full Range Boost setting that enhances all the frequencies.

ElectroLead appeared recently into the market and offers pedals of the highest quality. Superfan Greg Coxhill is the man in charge of the production and design of these excellent products. Electrolead offers four different models of treble boosters, the RSB, GC-46, NOVO and NOVO CLASSIC. The RSB and Novo (the Novo is the same as RSB at tone 6 volume 10) produce the Cornish type sound, and the GC-46 and Novo Classic (the Novo Classic is the same as GC-46 on tone setting 4 volume 10) produce the early Queen rangemaster sounds.