Brian May has used VOX amplifiers throughout his career and has now collaborated with Vox to launch the new Vox AC30 Brian May Custom Limited Edition.

VOX announced a new amplifier officially endorsed by Brian May, the Vox AC30 Brian May Custom Limited Edition. This combo is a re-creation of Brian’s stage amp and boost pedal set-up, and is a limited edition run of only 500 combos world-wide, never to be repeated. The amplifier inlcludes the “Blue AlNiCo” speakers, an internal treble booster and Vox have also incorporated a 15 Watt switch on the back panel. 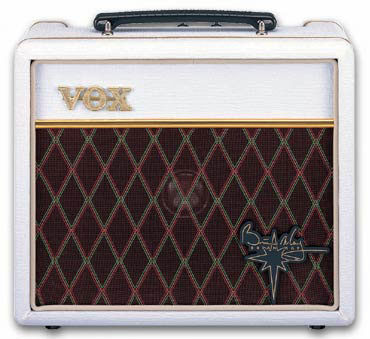 VOX launched a new amplifier officially endorsed by Brian May, the Vox Brian May Special in Spring 2003. This amp is designed to accurately reproduce the tones produced by Brian’s legendary ‘Deacy amp’ which was built for him by John Deacon many years ago. The Vox amp features a 6.5 inch speaker, 10W output and all solid-state components.

The Deacy amp has been used by Brian for many years to produce his trademark guitar orchestrations. The original is a small battery-powered amplifier with no controls whatsoever. Brian simply plugs his Red Special guitar into the Deacy amp via his treble booster, which overloads the input stage and gives that wonderfully smooth saturated sound, which Brian used to build guitar harmonies and develop cello, trumpet and clarinet-like sounds. The Deacy amp was primarily built from junk components that John recovered and fitted to a small Hi-Fi speaker. When recording using this amp, Brian often puts a coat over the top, to reduce the treble.

The new Vox amp is not designed to look like the Deacy amp, but to give the same tones as Brian’s original used in combination with his treble booster. In addition, the Vox Brian May Special features an output following the treble booster section, so that this output can be plugged into another amplifier (such as a Vox AC30) to get the traditional Brian May AC30 sounds. Unlike the original, the Brian May Special does feature volume and EQ (tone) controls, to allow some tonal flexibility. It is designed primarily for home use, recording or as a pre-amp to feed into a larger amp when playing live.

The list price is $199 US dollars (£139 pounds in the UK), which makes it excellent value for money. 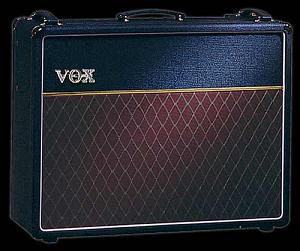 Brian has used Vox AC30s extensively, both for recording and playing live. His amplifier of choice is the AC30TBX, which is the top-boost model with blue AlNiCo speakers. Brian actually uses the ‘Normal’ channel of the AC30 (i.e. not the top-boost channel) and he runs the amps flat out via his treble booster to get his trademark tones. He has also used the AC30TB model on many occasions, which features the greenback speakers rather than the blues. Brian uses both original AC30s and modern re-issues. They are essentially stock, although he has them modified to remove the excess circuitry and valves which he doesn’t use, which makes them more robust for live work. This modification also affects the tone of the amp slightly and puts the overall gain up by about 6dB. He is also extremely choosy about the valves (tubes) he uses in his amps, because running them flat out will quickly destroy poor quality valves. valves select the best for Brian to use in his AC30s. 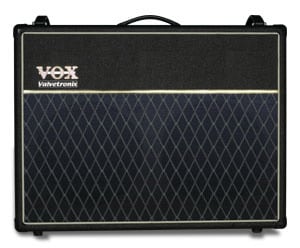 The Vox Valvetronix range of amplifiers feature an accurate model of the AC30. Brian does not use these amplifiers, but they can still achieve a convincing Brian May tone. The Valvetronix range are modelling amps, but they do use a clever valve power stage, which can be reconfigured to mimic the responses of different amp types. The Valvetronix amps also have a built-in treble booster, so Brian May tones can be obtained from a single unit, although users have commented that you can get much more accurate tones by using an external treble booster. The Valvetronix is available in 60 and 120 Watt versions with either standard or Celestion Neodog speakers.